We know that the original and eternal qualities of the soul are love, peace, purity, happiness, truth, knowledge and powers. We also know that powers don’t mean the muscle power or money power or political power or any other physical power. These are the spiritual powers. 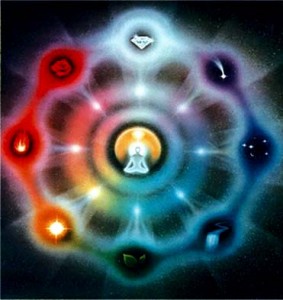 Generally, the powers are signified by the strength in the arm and so eight hands of the shakti who are deities; known as ‘Ashth Bhuja’, show these eight spiritual powers. In reality there are many powers than these eight. Time also has power. It is said that Samay bada balwan. (Time is very powerful). Samay ki balihari! Time of ‘Confluence Age’ (Sangam Yug) is very special time in the world drama cycle, every elevated action we performed at this time we get 100 fold returns.

Thoughts are also very powerful. It is said that God has created this world with just one thought. Many personalities, like scientists, politicians, philosophers etc. have their names engraved in the history due to the power they had in their thoughts. Their powerful thoughts made impossible into possible. e. g. Mahatma Gandhi, Mother Terresa, Martin Luther king etc. etc. They gave their life for one single thought and achieved impossible feats.

The virtue like Peace, Purity, Love is also having great powers. Peace cools down an angry man, Purity can provide a shield of protection and Love can make impossible to happen.

Knowledge has a great power. Knowledge gave us understanding. It guides, shows us a path and so it is known as light. Realisation through knowledge is known as enlightenment. Knowledge is also known as wealth, as it is a source of income.
The powers have particular importance at this time of confluence age. In golden age the deities do not require these powers. They require only Virtues. We require powers because under the cover of powers the virtues are sustained, they are flourished. Like on a battlefield when army marches ahead to attack the enemy, it is provided with a cover of aeroplanes, similarly powers provide that cover to the virtues to fight out vices. The weak soul can’t hold virtue. It is welknown fact that if we speak one lie, subsequently we will have to speak 100 lies in support of it and even then at an appropriate time the truth will prevail. It is also preached in all religions to speak truth, then why people speak lie? Once, in my early childhood, I went to my aunt’s place. During my stay there, one day some respected personalities of that city were moving door to door to collect the donations for some worthy cause. My uncle saw them gradually approaching to his house. He then told me to tell those people when they come to his house that he is not there. Being an obedient child though I followed his instruction and told those respected elders that my uncle was not at home. However, my mind was wondering as why my uncle spoke a lie. Why he has not told them frankly that either he was poor or he didn’t believe that down the line the money will reach to the hands of the needy people (though they themselves may be honest) or he didn’t have faith that that was a worthy cause or whatever his views were. He had avoided to tell the truth and gone for the short cut of avoiding them by using me. Because he is a weak soul he preferred to follow that route.

Powers are like neutralizing factor, they neutralize the effect of vices/negativity and then the positivity stands out like bright Sun after the eclipse. After understanding the importance of the role-played by powers in ones spiritual development let us now go into the detail discussion of the main eight spiritual powers.